Over the years I've struggled with making a decent pie crust or pastry. I've found a few recipes that have gotten me by and I've tried many more. Ones that use butter exclusively. Ones that call for only shortening. Ones calling for various combinations of both. Some claim adding vinegar makes for a tender crust. Some suggest buttermilk. Others say using a food processor is the best technique. Then some say don't. Cornmeal and cheddar cheese have cropped up in a few, along with a myriad of ingredients. It's all so confusing. Where to begin?
How do I sift (nice pun eh?) though all the recipes and find the perfect one. I guess I should start by deciding what I want in a pie crust. My preference is a crust with light, buttery, flakey layers. Kind of a modified puff pastry. A bit sturdier though, to stand up to the heft of the filling. So once again I found myself poking around on Gesine's blog: Confections of a (Closet) Master Baker. There I found her recipe for Quick Puff. It was such a simple recipe, could it deliver? I gave it a try and EUREKA! It was perfect. I learned the secret to buttery, flakey, light pie crust: simple ingredients and technique. Give it a try. It doesn't call for sugar so it will work great with either sweet or savory pies. I cut the recipe in half and it was plenty for a full double crust 9-inch pie. But, as long as your taking the time, why not make the full recipe, divide the dough and freeze for later. Save some steps down the road.
Don't forget to go poke around Gesine's blog and check out her books. She got a great wry humor and a refreshing perspective on cooking.
Let's get started. . . 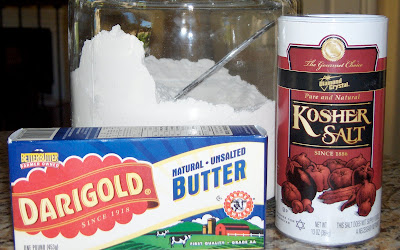 Here's all you need: flour, butter (I always use unsalted.), salt and water. Simple! 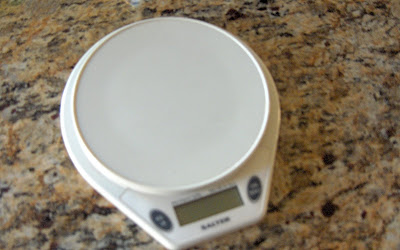 Use a scale to weigh out your flour. For serious baking weight usually trumps volume.
This digital version by Salter has served me well over the years. 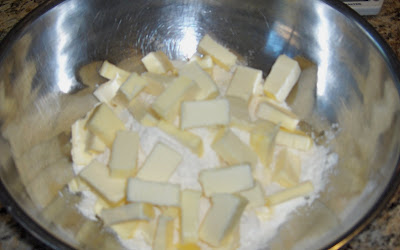 Cut the butter in 1-inch-ish chunks and toss them in a big bowl with the flour. 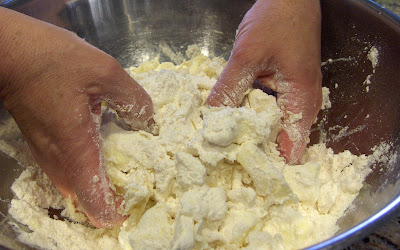 Use your hands to mush it about breaking the butter down into smaller chunks. You're not looking to get all the flour completely incorporated and you certainly don't want the texture of "course meal" like many pie crust recipes want. Just get the butter broken down a bit. You want some chunks. Trust me. 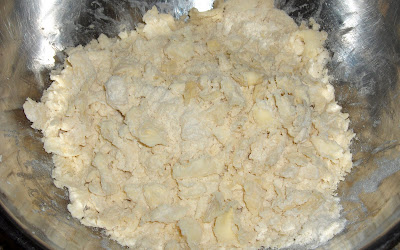 Like this is just fine. Chunks of butter, coated with flour and
some extra flour in the bowl. 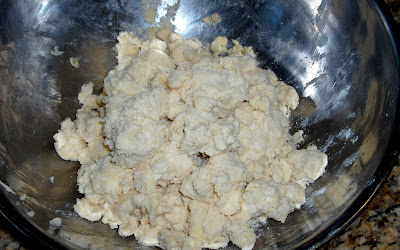 Add the water and toss it around until it just starts to clump together.
It's going to be lumpy. On a VERY VERY GENEROUSLY floured surface, form the dough into a rough square. Now walk away and let it rest. A good 10 minutes or more. 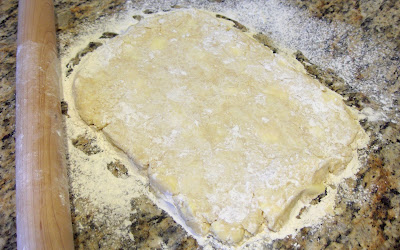 Once it's rested, generously flour the top and roll into a rectangle. It may fall apart a bit, don't worry. Just stick the loose chunks back on and keep going. 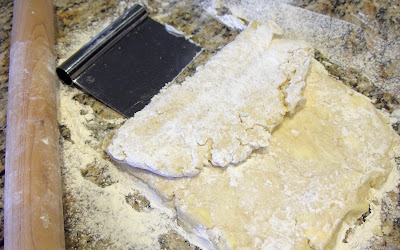 Use a pastry scraper to flip 1/3 of the dough on top of itself. 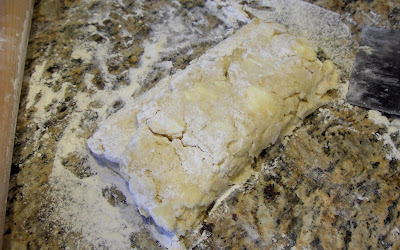 Now flip up the other side on top. Like you're folding a letter. Again, bits and chunks may fall off, just stick them back on. 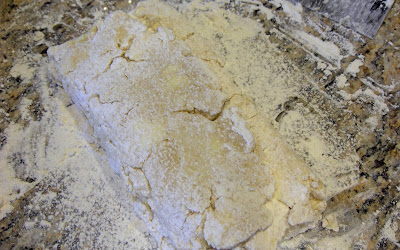 Turn the whole mess 90 degrees and give it a liberal sprinkling of flour. Roll it out again to a rectangle. 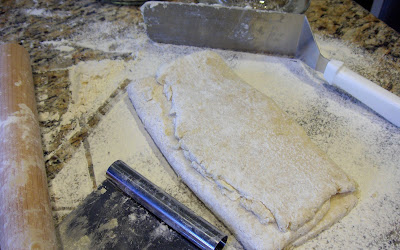 Repeat the folding 3 more times keeping everything generously dusted with flour. Your finished dough should look like this. It will have come together more smoothly and resemble pie dough. 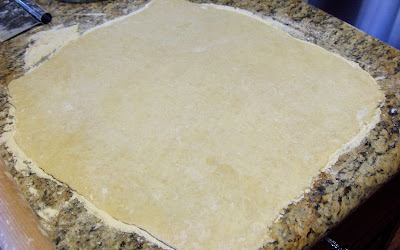 Let it rest a bit and then roll out as you would for any pie or recipe that uses pie dough. Or divide it up, wrap tightly and put in the freezer until your ready to make pie.
Here again is the link to the recipe. Remember as shown above I made 1/2 the recipe. Practice up, pie season will be here before you know it.
Posted by Becky at 8:03 PM

Becky
Wife, mother, friend, graphic designer, self taught cake decorator, baker and chef, amateur humorist and writer. If you make it, I will eat!

Hey, check out these favorites: